The 7th successful edition of ICC T20 World Cup 2020 is ready to kick off in Australia. According to official schedule this event will start from 18th October 2020 and ran until 15th November 2020. Top 12 cricket teams from all around the globe will compete in 45 matches of this tournament. 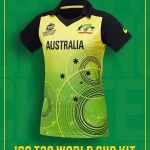 Australia has also confirmed their participation in ICC T20 World Cup 2020. No doubt Aussies are counted among the most dangerous T20 teams of the world. However Australia has never won the Title of T20 Cricket Champions in the history.

The high officials of Australian Cricket Council have also launched the New Kits of their side for ICC T20 World Cup 2020. The new uniform of Australia looks pretty decent as color combination along with design attracts every one in one glimpse.

Australia new kits for T20 World Cup 2020 are quite different from their ODI uniform. Black, Yellow along with Light Green color is used in the manufacturing of new kits. On the right side of the shoulder the National Flag of Australia is printed.

On the center of the shirt the name of country is designed whereas T20 Official Logo is depicted on the left side of the chest. The trousers are in complete black color with light green shades on the both edges of the trousers.

Australia is placed in group 1 along with New Zealand, Pakistan and the defending champions West Indies. Aussies are scheduled to play 3 matches against its group mates. In order to qualify for Semi-Finals they need to win 3 of them.

It is going to be the 7th consecutive appearance of Australia in ICC T20 World Cup. Despite of the fact that they are the pioneer participants of this event still they are waiting to claim the trophy of Champions. The best ever performance showcased by this side was back in 2010 when they ended up as Runner-ups.

Recently Australia has also announced their probable playing squad for ICC T20 World Cup 2020. Surprisingly Aussies have re-call some of their most experienced and senior mates to appear in this thrilling event.