ICC has declared the schedule for the upcoming ICC T20 World Cup 2022. This event will take place from 16th October 2022 in Australia. The tournament will take place in the Super 12 Round Format. However, before the start of the main rounds, 8 teams will also compete with each other in qualifying rounds. 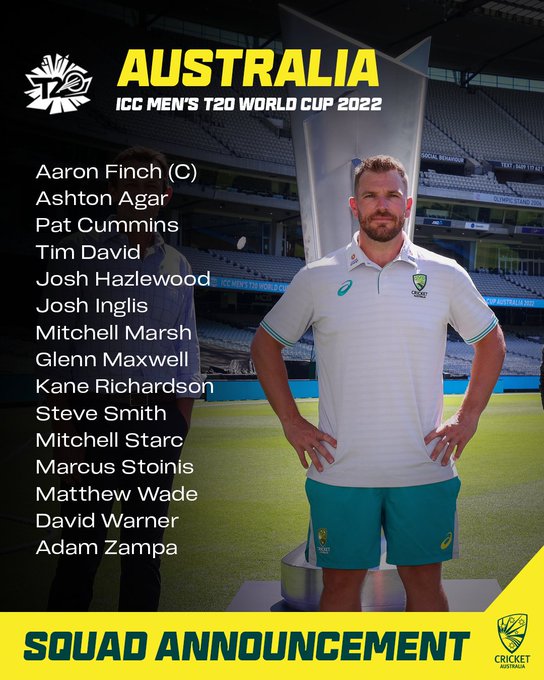 Australia is the host nation and the defending champions of the ICC T20 World Cup 2022. It is going to be an interesting event to watch how Australia will perform in front of its home crowd. As they will face huge pressure which might impact their performance.

According to the official details revealed by ICC, Australia is in Group 1 along with New Zealand, England, Afghanistan, and the two other qualifying teams.

Well, Australia is considered the Most Successful Cricket Team in the World. Previously, They have won the title of ICC World Cup 5 times in history. They won their first-ever T20 World title in 2021.

Australia will make their 8th consecutive appearance in ICC T20 World Cup. Therefore, Cricket experts are predicting this side is a Hot Contender for the title. The reason behind the selection of Aussies is their brilliant performance in the recent T20 series against some hardcore T20 sides of the world.

The selection committee of the Australia Cricket Board has announced their expected T20 squad for the upcoming ICC T20 World Cup 2022. Unfortunately, some senior players of the Australian team are not in the playing squad due to their poor performances in recent games.

Aaron Finch will captain Australia in ICC T20 World Cup 2022. No doubt the Australian side has improved in the top manner under the captaincy of Aaron Finch.

Australia’s opening pair includes Aaron Finch and David Warner. No doubt both these batters are the most dangerous T20 players. Australia is expecting some brilliant performance for both these batsmen.

The pace bowling attack of Australia involves some world-class pace bowlers. Therefore, the Aussies will dominate their opponents on the behalf of their brilliant pace attack. Pat Cummins, Mitchell Starc, and Kane Richardson are front-line pacers for Australia in ICC T20 World Cup 2022.

Here's the 15 who will represent our national men's team at the upcoming T20 World Cup and tour of India 🇦🇺 pic.twitter.com/DUgqUGWuyV