The most awaited cricket event ICC T20 World Cup 2022 is ready to kick off in Australia between 16th October and 13th November 2022. A total of 16 cricketing sides from all across the globe with compete in 45 thrilling matches in this tournament.

South Africa will also participate in ICC T20 World Cup 2022. This site is placed in Group 2 along with Pakistan, India, Bangladesh, and two other qualifying teams. Proteas will directly appear in Super 12 Rounds whereas they will play 5 group stage games before jumping into the next rounds.

Although South Africa is one of the best T20 teams. But Proteas are still searching to claim their first Title Victory for ICC T20 World Cup. This team has never won the T20 World Cup title. The best-ever performance showcased by this side was back in 2014 when they ended up in 4th place.

Recently the officials of the South Africa Cricket Board have also announced their squad for ICC T20 World Cup 2022.  The selection committee of Proteas has selected a mixture of senior as well as young players to decorate their playing squad. Moreover, the committee has focused on the selection of those players who had performed impressively in the recent series. 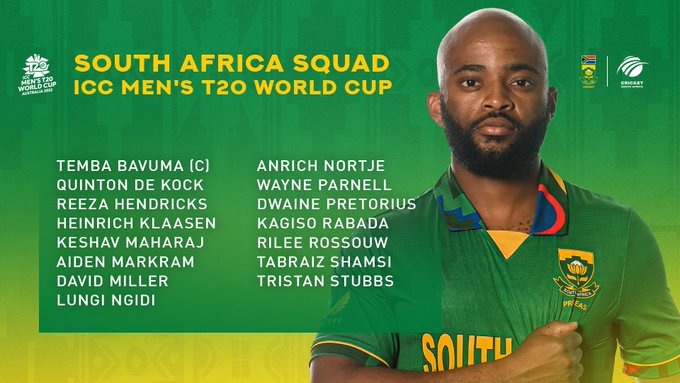 The Temba Bavuma will captain South Africa for the second consecutive time in ICC T20 World Cup 2022. No doubt he is capable to lead his side in crucial moments.

When it comes to the pace bowling attack, South Africa is always the toughest side to face. Kagiso Rabada, Lungi Ngidi, and Anrich Nortje are dominating pacers in this squad.