Though, in the T20 format it is not going well for Team Green from a couple of Series, but with eleven consecutive Series victories Pakistan tops the ICC T20 Rankings 2019. Since that 1-0 Series victory against England in 2016, Pakistan seemed to never look back. They won many series in the foreign countries against England, Australia, Sri Lanka, New Zealand and West Indies. They are the best team in T20 Cricket now with a fact that whatever may be the circumstances, Pakistan T20 Captain Sarfraz will figure something out for Pakistan.

England holds the second Spot in T20 Rankings of 2019. They have won five out of their ten previous series with a winning streak of three series. They recently defeated Pakistan at home and won two foreign tours against Sri Lanka and West Indies. They have the best opening stand of Jhony Bairtstow and Alex Hales who are the brutal hitters in T20 Cricket. In addition, Ben Stokes is the man that can do impossible things for England when they are in need off.

Despite the fact, the recent big Tournament of ICC Cricket World Cup 2019 was a nightmare for South Africa. But, when it comes to T20 Cricket, South Africa are almost unbeatable. With the existence of great legends such as Ab De Villiers South Africa can defeat any top team in T20 Cricket. Their winning streaks now counts to four in T20 format and its been a year since South Africa lost a T20 series. With the likes of Quinton De Cock and Fuf Du Plesis, South Africa occupy the third spot on our table.

Cricket is the most popular sports in India and over the years Indian Cricket has given us top cricket legends such as Sachin Tendulkar and MS Dhoni. The Men In Blue were remain undefeated in 2018 in T20 format and there was a time when they were looking forward to break the record of Pakistan’s wining streak in T20 Cricket. However, since the start of 2019, India have won only one series against West Indies in a foreign tour. Perhaps, the time has come for BCCI to rethink their plans about T20 Cricket in India.

There was a Time when the Great Australian World Champions for almost a decade in ODI format. But, it seems like with the passage of time, Australia is not doing well in T20 Cricket. They have never won a World Cup in T20 format and out of their ten recent T20 Series, Australia have won only three. Things are getting better for Australia, since Steven Smith and David Warner came back to Australia team. Perhaps, Australia will get back to the top, with few steps to be retaken.

The ICC Cricket World Cup was the moment, when New Zealand came very close to win their first ever cricket world cup. Things are getting better for New Zealand Cricket team in ODI and T20 as well. Since 2018 they have defeated the likes of West Indies, Sri Lanka and India in T20 series. Kane Williamson and his men need to be well prepared before the big tournament of ICC T20 World Cup in 2020.

There was a time when Afghanistan were thought to be weaker team in T20 cricket. The times have changed quite recently and Afghanistan have become a stronger team in T20 format. They have won five of their recent T20 series against Zimbabwe, Bangladesh and Ireland in 2018 and 2019. Rashid Khan with the likes of Mohammad Shehzad and Najibullah Zardan seems fit to get Afghanistan a prominent place in T20 Cricket.

Afghanistan scores 4694 points with a T20 rating of 235 at the seventh place. They have surpassed the likes of West Indies, Bangladesh and Sri Lanka. Go on Afghanistan, you are going fantastic.

2014 was the year when Sri Lanka became the World Champions. On that time, they were the best team in the world, but with the retirement of legends such as Kumara Sangakara, Tilkaratne Dilshan and Mahela Jaywardnay, the time have changed. They have come down from number one Team in T20 Cricket to eighth place. It seems like Sri Lanka needs bold steps to fill in the gap left by the legends.

West Indies have been T20 Champions for two time. They claimed the World T20 title in 2012 and then against in 2016. But, it seems like West Indies have played poor T20 Cricket in recent times. They have to defend their title in ICC T20 World Cup 2022. With Kevin Pollard in Charge, West Indies T20 Cricket team gets reshaped in days to come.

Bangladesh carries 4468 points at the bottom of the table with a T20 rating of 223. Though, their ODI team is doing fine at the moment, but they need to rethink their T20 format to climb up our T20 Rankings table. Musharfe Murtaza and his team mates need better T20 Skills, so that they can hit ICC T20 World Cup 2020 with their full strength. 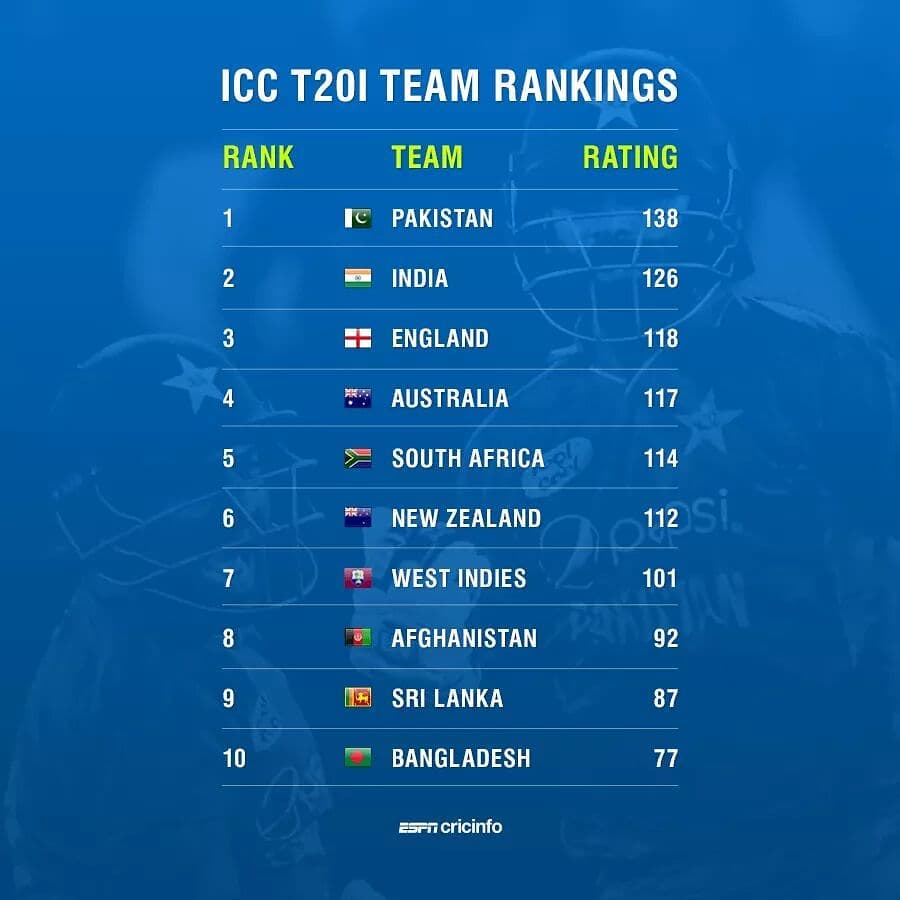