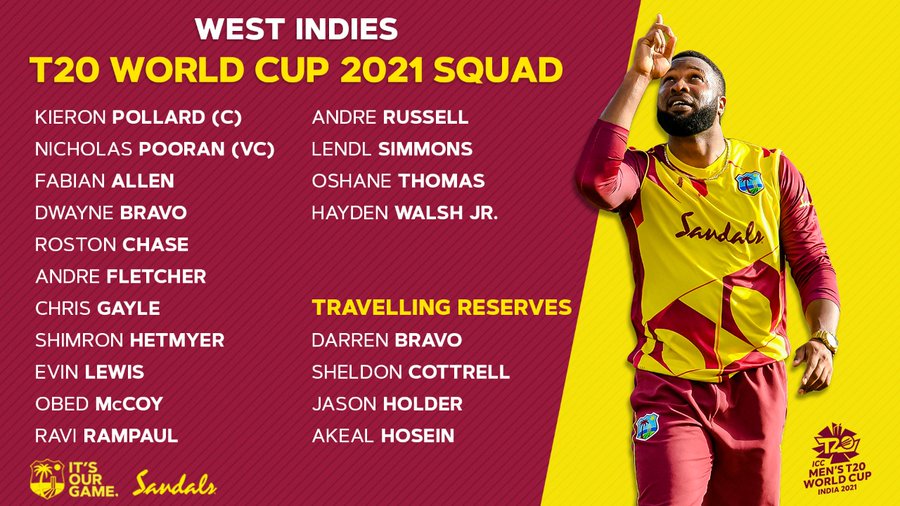 Two time T20 World Cup Champions West Indies are buckling up to defend their ttitle in the T20 World Cup 2021.  West Indies is placed in Group 1 along with Australia, South Africa, England and two other qualifying teams. All these sides are considered as hardcore T20 teams of the world. Caribbean side have picked their top class cricketers to stay alive in this competition.

The most successful side of T20 World Cup, West Indies will appear in their 7th consecutive season of ICC T20 World Cup 2021. West Indies has won the title of T20 Champions for the 2 times in the history back in 2012 and 2016.

During the last few months West Indies has made several changes in their playing squad. The reason behind massive changing is the continuous poor performances from their senior mates. Now majority of youngsters are present in their squad.

The selection committee of West Indies has also revealed their playing squad for the upcoming ICC T20 World Cup 2021. The Selection board have picked up a combination of experienced and young players to strengthen their team squad.

The  most experienced and T20 specialist Kieron Pollard will captain West Indies in this event. West Indies has performed really impressively under the captaincy of Pollard. Now, they are hoping to continue their brilliant display of cricket.

West Indies is also known for their best hitters especially in T20 format. Some senior batmen like Chris Gayle and D Bravo are also playing in this tournament. Therefore, Caribbean side has enough potential to compete in this event.

The main batting unit of West Indies revolves around Kieron Pollard, Shimron Hetmyer and Evin Lewis. All these batsmen are among best T20 players in the world right now. During T20 World Cup 2021 the performance of these players will play vital role in the victory of their squad.

West Indies is also capable to produce world class pace bowlers Like Fabian Allen, Sheldon Cottrell and Keemo Paul. These bowlers will be the pace attackers for West Indies during the upcoming ICC T20 World Cup 2021.