West Indies are all set to take on Scotland in the 3rd T20 match of the T20 World Cup 2022. WI vs Sco Group B T20 WC 2022 match will take place at Bellerive Oval, Hobart on 17th October 2022. You can check Who will win West Indies vs Scotland Today Match Prediction here on this page.

After losing the tw0 match T20 series against Australia, West Indies started their T20 World Cup 2022 campaign in good fashion and defeated UAE by 17 in the 1st Warm-up match. Now they are ready to face Scotland in the 3rd T20 match of the T20 World Cup 2022. On the other side, Scotland lost the two-match T20 series against New Zealand but they outclassed the Netherlands by 18 runs in the 2nd warm-up match. Now West Indies vs Scotland 3rd T20 match will be hosted at Bellerive Oval, Hobart on 17th October 2022.

West Indies is the only Cricket team to win the T20 World Cup twice (2012 2016). However, once a mighty T20 cricket team could not make it to the Top 8 teams on ICC T20 team rankings. Likewise, Sri Lanka West Indies are also participating in 1st round in order to qualify for the Super 12 stage. They have some of the best T20 players like Jhonson Charles Evin Lewis and Nicholas Pooran. 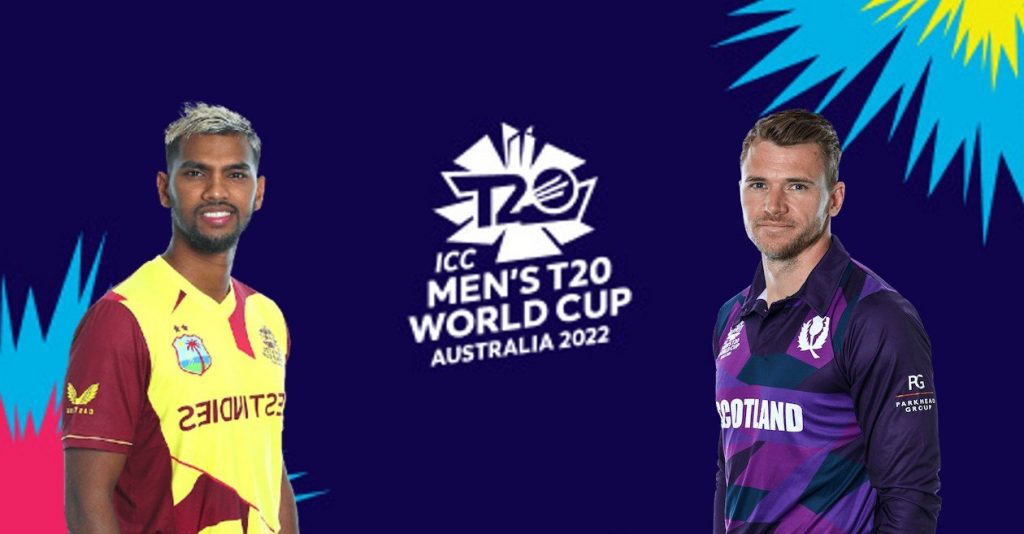 Scotland ended up in the top 11 teams during the T20 World Cup 2021. As per ICC Qualify, they secured their spot in the 1st round of the T20 World Cup 2022. Currently, Scottish Styres is ranked 15th on the ICC T20 team rankings for Men. They have some of the best T20 cricketers in the shape of Berrington Munsey and Leask.

West Indies ad Scotland have never come across in the T20 format before this match. Surprisingly Scotland shares a better T20 win percentage of 44% than the West Indies’ 43%. It will be interesting to see how both teams perform in this match.

West Indies Will win this match. Though they have never met Scotland in the T20 format before, the two-time former T20 Champions have good experience taking on low-key teams like Scotland.

On the other hand, Scotland will be putting up their best to win this match. This victory will ease their pressure in coming games and it also help them attain the top spot on the points table. All in all this is going to be a fantastic T20 match for cricket fans around the globe.