Just In! ICC has announced the groups Round 1 and Super 12 stage for ICC T20 World Cup 2021. As per the announcement, India and Pakistan are going to meet in Super 12 stage of the T20 WC 2021. The mega cricket tournament of T20 World Cup 2021 will take place in UAE and Oman, as it moved away from India due to covid-19 situation. The Official Twitter handle of ICC Broke this news on the Internet.

With the groups for Round 1 and the Super 12 now confirmed, a deeper look at every team, their history in the tournament, and their big match in the group stages ✨#T20WorldCuphttps://t.co/Xsk1LeMbUp

Well, the news have just come for all the die-heart cricket fans who were eagerly waiting for the next season of T20 World Cup. The arch rivals India and Pakistan are going to face each other in the TWC. Given the previous history of two nations, it is going to be an epic clash between the two sides. As, Pakistan has never defeated India in any World Cup match.

ICC also declared the groups for Round 1 and Super 12 stage for the tournament. As per the reports, Bangladesh and Sri Lanka have directly Qualified for the Round 1 stage due to their higher T20 rankings. They will meet Ireland, Scotland, Oman, Netherlands, Namibia and Papua New guinea, which qualified from performing good in the ICC T20 World Cup 2021 Qualifying round. 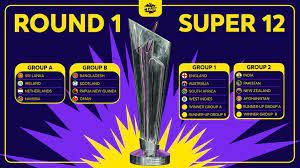 Whereas, England, Australia, South Africa, West Indies are placed in Group 1 of Super 12 stage. They will be later joined by the Winner from Group A and Runner up From group B of Round 1 stage.

On the other side Pakistan, India, New Zealand and Afghanistan remain in Group B of Super 12 Stage. They took will welcome Winner from Group B and Runner up From group A of Round 1 stage.

So, T20 World Cup 2021 is on! Suit Up yourselves Cricket Fans around the Globe! Because! This is going to be one heck of a tournament.