Namibia is all set to take on the Netherlands in the 5th T20 match of the T20 World Cup 2022. Nam vs Ned Group A T20 WC 2022 match will take place at Simonds Stadium, Geelong on 18th October 2022. You can check who will win Namibia vs Netherlands Today Match Prediction here on this page.

After defeating Sri Lanka in the T20 World Cup 2022 opening match by 55 runs Namibia are now gearing up to take on Netherlands in the 5th T20 match of the tournament. As of now Namibia stand at the top of the table with 2 points in one game. On the other side Netherlands also outclassed UAE by 3 wickets in the 2nd T20 WC match. At this point Natherlands hold the 2nd spot on the points table in one game. Namibia vs Netherlands 5th T20 match will be hosted at Simonds Stadium, Geelong on 18th October 2022.

What a start for Namibia in the T20 world cup 2022 They upset Asia Cup 2022 champions by 55 runs in the inaugural match. Namibia set up a handsome total of 163-7 while batting first against Sri Lanka. The Asian Champions on the other hand fell short 55 runs in the chase and undergone a total collapse. As a result Namibia gain the top spot on the points table with a handsome NRR. 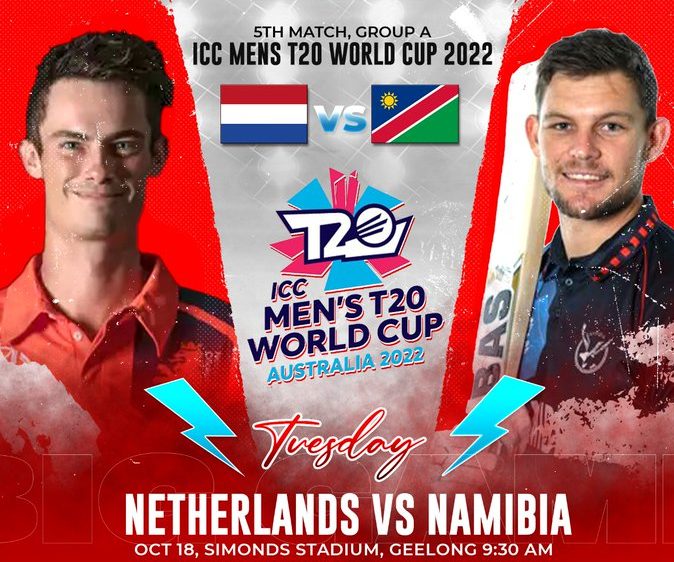 On the other side Netherlands were too phenomenal against UAE in the 2nd match. They restricted UAE to a short total of 111 for 8 in 20 overs with a classy spell from Bas de Leede. Then they run down the target in the last over with considerable runs from their top and middle order. Now they occupy the 2nd spot on points table with 2 points to their name.

Namibia and Netherlands have played only 2 T20 games against each other with each winning one game. So you can say that both teams are equal in the match. However the way Namibia outclassed the Asian Champions in the previous match one can say Namibia will dominate Netherlands in this game.

Namibia will win this match. Their previous victory against Asian Champions have given them so much momentum and they would like to keep it going. Their bowling department is doing exceptionaly well at the moment and a slight help from the top batting order will do the job for them.

On the other side Netherlands will be looking forward to win this match. This is a much needed victory for them which will grab them the top spot on the points table. All in all this is going to be a thrilling match for the cricket fans around the globe.