Just In! Islamabad United have announced Rumman Raees as their new bowling Consultant for PSL 2021. This appointment came before the 6th season of Pakistan Super League which is due on 20th February 2021. The official Twitter handle of ISLU team broke this news on internet. 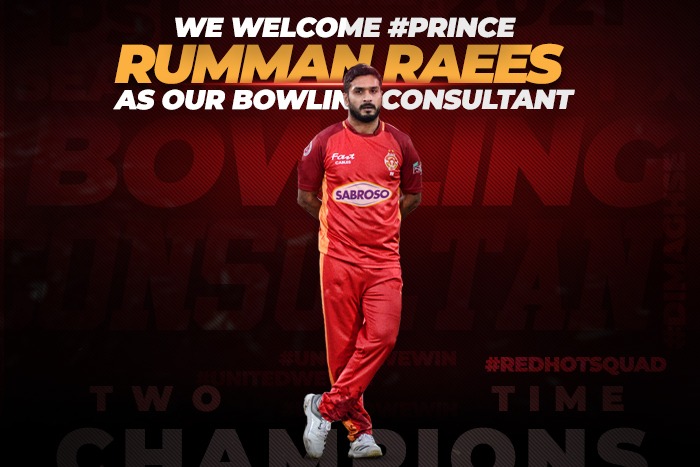 @rummanraees15 is #ISLU’s bowling consultant for PSL 6 revolving light “Rummi is perfect for our ideology. He is playing cricket currently, understands the needs of modern cricket and can relate to our young bowling line-up”, says @johan_botha

Rumman Raees appreciated his appointment in his tweet as:

Team for given me new role

I would like to thank Islamabad United for giving me an opportunity to utilise my T20 experience and work as bowling consultant with the team.

I will be fully committed to my new role and will assist the bowlers and the team to my best. Meanwhile, I will also not lose my focus to comeback on field as a player and overcome the injury concerns soon InshAllah.

Keep supporting Islamabad, because #UnitedWeWin. Thanks!

Rumman Raees have been an impressive bowler for Islamabad United. He played for ISLU team in all the previous 5 seasons of Pakistan Super League. Now, Islamabad United have formally appointed him as their bowling Consultant.

PSL 2021 is all set to start from 20th February 2021 in Pakistan. All the Franchise teams are making final arrangements ahead of this great Cricket Tournament. In this regard, Islamabad United Pick up Rumman Raees as their new bowling Consultant.